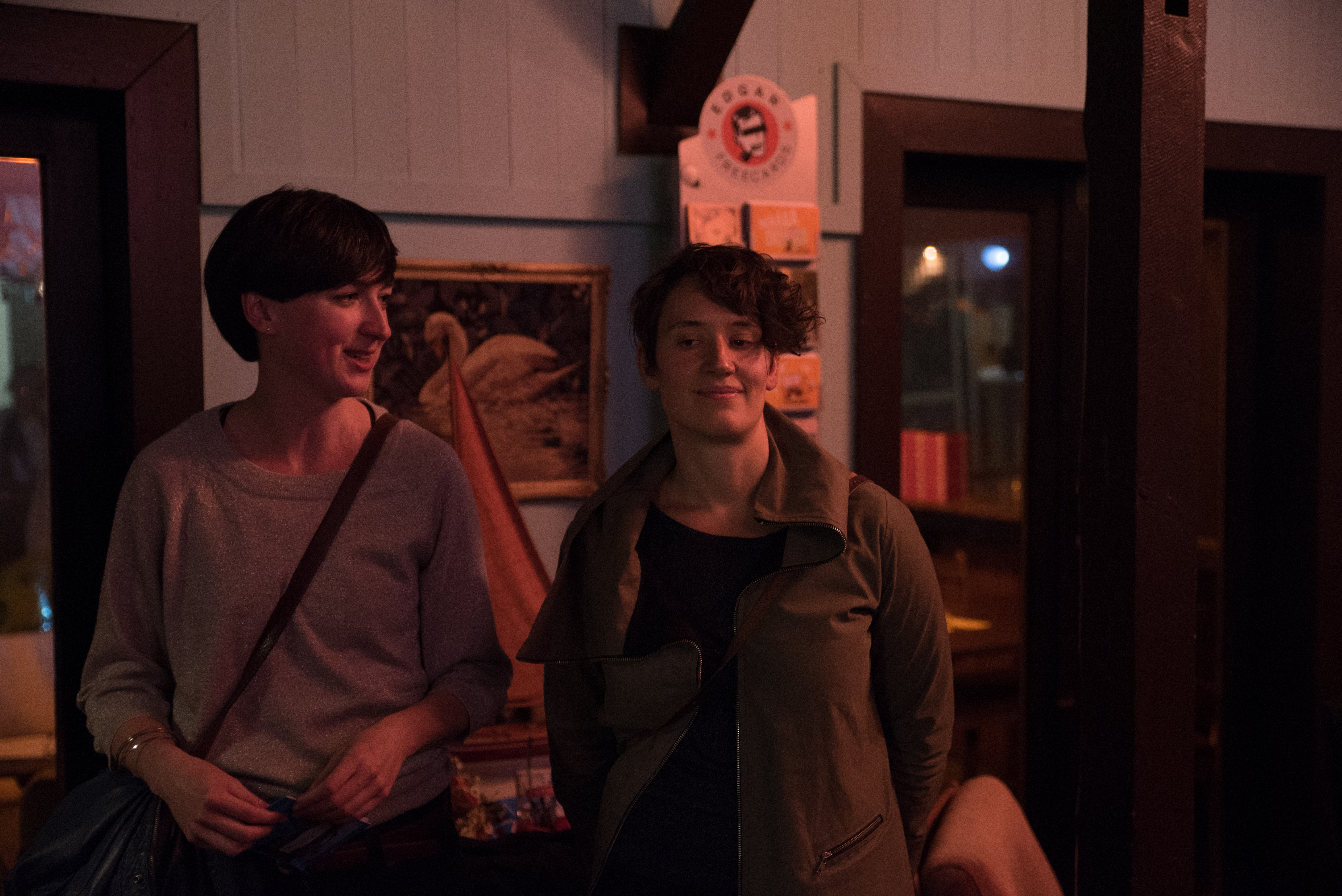 The discourse series “off-the-record” aims to counter the lack of female pioneers in Frankfurt’s art and cultural landscape: with a bundled programme of female positions from theory and artistic practice, which moves the work of female theorists and artists from the “off” into the public eye. The aim is to create new points of identification and friction for women active in these fields. Coming from news ciphering, the term “off-the-record” not only refers to an under-representation of female positions that did not find inclusion, but equally alludes to a particular exchange within a community of communication – a complicity that mutually strengthens its positions through critical exchange.

The credo of the series “Thinking in precise vagueness”, a quotation from a text by the performance theorist Krassimira Krushkova, argues for a reciprocal relationship between theory and practice that moves beyond prefabricated definitions and in resistance to any ideology:

“It is about a theory that softens what would be hard doctrine, that turns – in precise vagueness – against every aesthetic disciplining and thereby also against every ideological setting. This theoretical thinking has a programmatic weakness, a weakness for the strong discursive potential of art in our time of jumped spaces. It thinks theory as expertise, extension and potentialisation of art, as definitional work and at the same time de-finition.”

With this, Kruschkova implicitly ties in with the Frankfurt School, which worked “without a guiding principle” (Adorno) against the ideology of the definitive and totalitarian. At the same time, her choice of words – softening the hard, the precise blurring, the weakness for something – operates with categories that were/are traditionally assigned to the feminine in patriarchal societies. In Krushkova’s writing, the supposedly weak term is reinterpreted as a strong expression without being fully absorbed in it. This work on the term does not simply replace the words associated with pointed, sharp (masculine) thinking with their opposites; rather, it works to replace the simple dichotomies of strong/weak, precise/blurred, hard/soft, masculine/feminine with more complex images of thought.

From this perspective, which refers equally to the Frankfurt tradition of critical theory and to a feminist position in the post-structuralist theoretical landscape, we would like to invite women artists and theorists from Frankfurt and the German-speaking world to enter into an open conversation with each other and the interested audience.

To conclude ID_Frankfurt’s feminist discussion series, we are inviting performance theorist Krassimira Kruschkova for a lecture in cooperation with the theatre studies department of Goethe University Frankfurt. In addition to her theoretical work and teaching, Kruschkova developed numerous innovative formats for the encounter of artistic practice and theory as director of the theory centre at the tanzquartier Wien. Her phrase “thinking in precise blur”, which accompanied our series, is one of her apt descriptions of these difficult, challenging, rewarding attempts at encounters in thinking.

On 12 June together with dance/theatre scholar  Martina Ruhsam and performance artist Kate McIntosh following the performance days of “In Many Hands”. Both share a special preoccupation with the world of things in performance. What does choreography actually mean here? And to what extent can a choreography of things perhaps liberate its audience from a viewing posture focused purely on seeing and enable a communal togetherness?

The talks will be held in English. Admission is free

Info and tickets for  “In Many Hands” by Kate McIntosh (10 & 11 June): http://www.mousonturm.de/web/de/veranstaltung/in-many-hands

The talks will be held in English. Admission is free.

What does it make us think when the word normal appears before a term? In the third edition of the feminist conversation series off the record. Thinking in precise blurriness, we talk about bodies and movements that defy the compelling criteria of normality. Together with the theatre scholar Mayte Zimmermann, the choreographer Antonia Baehr and the performers Pia Thilmann and Mirjam Junker, we want to take a look at those energies that neglect the average, tradition and the ordinary and favour what is not (yet) quite normal. What does it mean to stand “critical queer” against the norm, what does it mean to expand the “quite normal” by dancing and speaking?

In the second edition of the feminist conversation series off the record. Thinking in precise blurriness we want to question quasi-natural relations and talk together with theatre scholar Miriam Dreysse and Swoosh Lieu about the representation of caregivers. What can be observed in the visual construction of images of women in bourgeois theatre as well as in contemporary arts? And how could the connection between femininity, work and home be deconstructed, or rather denaturalised? For with the questioning of the family as a natural unit, care work would also be at stake: Who Cares?

Who speaks? –
“The theatre has never been a place for women”, Elfriede Jelinek stated in a 1996 interview, referring primarily to the moment of speaking, to the possibility of raising one’s voice as a woman. This was not intended. And that is why she adds: “When I, a woman, speak, I do not speak as one who is allowed to say I, but I speak, so to speak, (…) for all the other women. So the I is an isolated as well as a collective I”.
So is there always already a choir speaking? Or does each one speak only for herself? And when a chorus joins together on stage, can one speak of one character? And anyway, isn’t the chorus written in male form? Who are those all who speak there?
Together with Ulrike Haß (theatre scholar, Bochum), Marion Schneider and Susanne Zaun, the two directors of the theatre production “This Joke Wears a Beard – The Chorus and its Relationship to the Unconscious”, we would like to ask: How to speak chorally, how to speak femininely today? What comes up when we continue to understand the chorus as the one that speaks up as a counter-voice, that grants space – in this case: space for a speaking that in its femininity is always already transgression?

17:30 Warm Speak (Warm-Up with Marion Schneider and Susanne Zaun)
18:00 Panel Discussion
Audience Discussion following the performance “This Joke Wears a Beard – The Chorus and its Relationship to the Unconscious”

Admission is free. Tickets for the performance are available at the Mousonturm.

OFF THE RECORD IS MADE POSSIBLE BY ID_FRANKFURT e.V. AND: