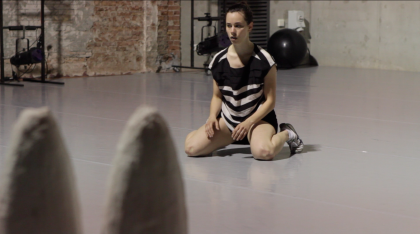 „Untitled for a carte blanche“ is the fifth work out of the „Untitled for […]“ series that include „Untitled for an Auction ( MAK Frankfurt, 2011), „Untitled for an magic carpet“,( MAK Frankfurt, 2011), „Untitled for a texture“( MAK Frankfurt, 2011) and „Untitled for an Ocean“ (Frankfurt LAB, 2012). The piece focuses on creative process and the way it sometimes takes rather curious, strange, unpredictable directions and forms. It inviters the viewer into a world where things are suggested rather then explained in a didactic way and is based on a piece created in 2007 for the Charleroi/Danses biennale, which is also part of the works shown this evening: „On the First Counterpoint“. Esthetically very different, both works nevertheless share a common ground. As one piece generated the other, it is full of parallels, quotes and references, deconstructed and translated, not always obvious, but there, to be uncovered by the audience as the piece evolves into sometimes rather curious, strange, unpredictable directions and forms.